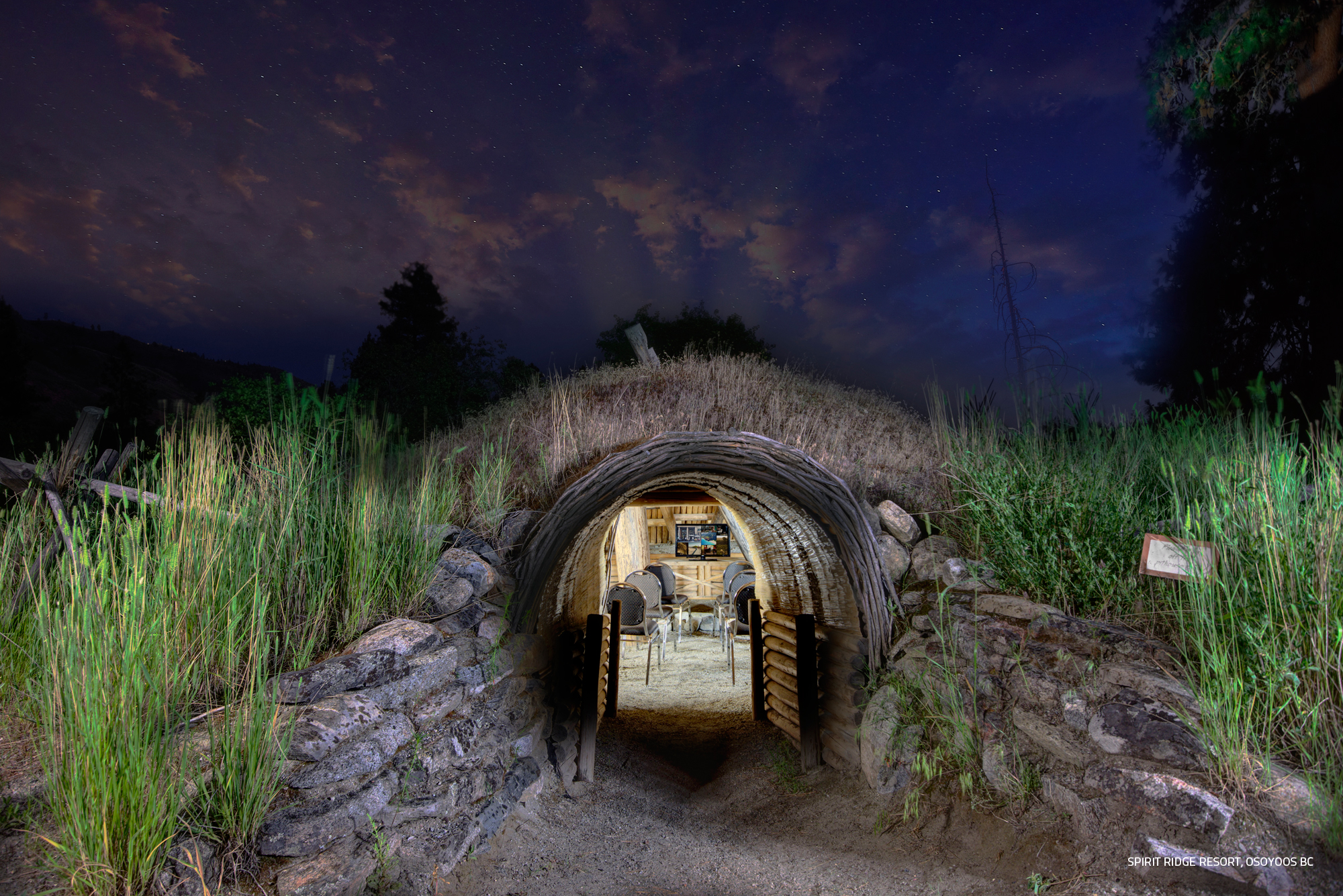 Long ago, when the Okanagan people wintered in the place where Spirit Ridge Resort now stands, they gathered around campfires and told stories.  These were known as Chaptiks and were passed down from generation to generation. Through Chaptiks, the young learned their people’s history and legends and how to care for the environment.

One of these legends was The Four Food Chiefs.  It featured:  Chief Black Bear (skəm̓xist), chief of all creatures o the land; Chief Spring Salmon (n’titxw), chief for all creatures in the water; Chief Bitterroot (Speetlum) chief for all things growing underground; and Chief Saskatoon Berry (Siya) chief for all things growing on the land.  A story of tolerance and kindness, it explains how The Four Food Chiefs sacrificed themselves in order to feed the People-To-Be.

As a tribute to this legend and the generous spirit behind it, the resort’s restaurant has been reimagined and named The Bear, The Fish, The Root & The Berry.  Here, in this beautiful space, Daniel Bibby, the resort’s GM and executive director, hopes guests will create new stories.

The Bear, The Fish, The Root & The Berry
Spirit Ridge’s new visionary executive chef Murray McDonald, the genius behind the reconceptualization, is well known for his passion for foraging and indigenous cuisine.  The gifted Newfoundlander joins the resort after working as the executive chef at Toronto’s prestigious Ritz-Carlton.  Some may recognize his name from his work at the renowned Fogo Island Inn, where he was the founding executive chef.  Under his guidance, the inn became a renowned luxury destination resort.

In keeping with the philosophy of the Four Food Chiefs, the new menu is fueled by the seasons, as well as McDonald’s appetite for foraging.  Think modern vineyard with indigenous roots.  This is beyond farm-to-table.  it’s about the abundance of the land, and creating cuisine with regional flavours like desert sage, sumac, juniper and rosehip.  To integrate these ideals, there are plans for a garden with herbs and heirloom tomatoes.

In May, the resort will have it’s own beehives, cared for by an experienced beekeeper.  Imagine how delicious this honey will be, imbued by the flavours of the desert.  The honey will be used in countless recipes as well as in delicious, hand-crafted cocktails infused with local plants and herbs.  Given the region’s prominent vineyards, there will be an extensive list of South Okanagan wines.  The goal is to accompany that with a curated list of hand-crafted beers and a choice of artisanal spirits from BC breweries and distilleries.

This restaurant establishes a new beginning for Spirit Ridge, one that signals the launch of its very own legend.