Spirit Ridge: The Next Chapter

At Spirit Ridge the story continues to unfold beautifully.  Their new restaurant, The Bear, the Fish, The Root & The Berry, is a huge hit with both critics and patrons. Named in honor of the Okanagan people’s idea of the Four Food Chiefs, this legend, or chaptik as it’s called in Okanagan, tells the story of the skəmíst (bear), ntytyix (fish), speetlum (bitteroot), seeya (berry) and how they worked together to feed the People-To-Be.

Chaptik like this one were important to the Okanagan culture.  They were used to pass down key life lessons to the next generation.  This included the importance of caring for one’s environment – a viewpoint at the foundation of Spirit Ridge’s new restaurant, which is both informed by it’s Indigenous roots and powered by it’s seasons. This is modern vineyard cuisine at its finest and freshest.  A place where Daniel Bibby, the executive director and general manager of the resort, hopes visitors will create legends of their own.

The talent behind the new restaurant is Executive Chef Murray McDonald.  The brilliant Newfoundlander, who decided as a teenager to become a chef so he could travel, has worked in kitchens all over the world.  McDonald was the founding executive chef at the celebrated Fogo Island Inn.  Under his guidance the inn became an elite destination resort.

In keeping with the restaurant’s philosophy, the dinner menu is grouped under The Four Food Chiefs and is constantly evolving according to the season.

At present under The Bear heading, diners will discover great meat-based dishes such as spruce roasted bison, juniper-brushed duck breast and rabbit pasta.  In The Fish category, diners are treated to BC favourites like wild salmon in a seaweed fishbone broth and maple-sage-roasted veg, sumac Bouillabaisse with mussels, lingcod, prawns, fennel and sweet potatoes, and west coast scallps with apple slaw.  Veggies and vegans have plenty of delicious foods to choose from under The Root heading: delicious meals like the wild rice and charred apple bowl, Yammy yam steak with sunflower pesto, and beetroot tartare.

Tami Maki, a proud member of the Wild Bear First Nations, is the gifted red seal pastry chef behind The Berry – the desserts.  Perfectly balanced and not overly sweet, these exotic desserts are a feast for the senses: apple mile feuille, peppered chocolate and and Pimihkan with Saskatoon berries and heirloom corncake.

The restaurant also boasts hand-crafted cocktails infused with local plants and herbs, and honey produced from the resort’s own hives.  It also has an extensive drink menu featuring South Okanagan wines, BC hand-crafted beers and a choice of artisanal spirits from BC distilleries.  No detail has been forgotten. 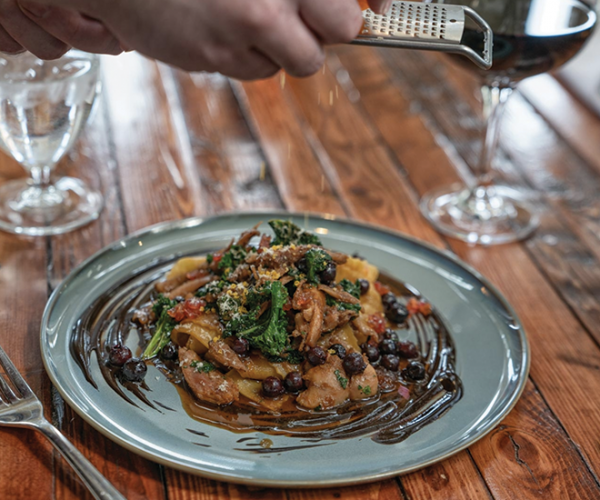 From the North Atlantic to the South Okanagan

Chef Murray McDonald, from The Bear, The Fish, The Root & The Berry 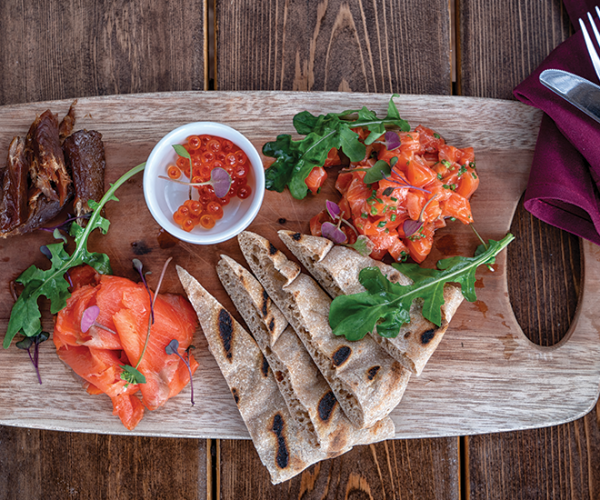