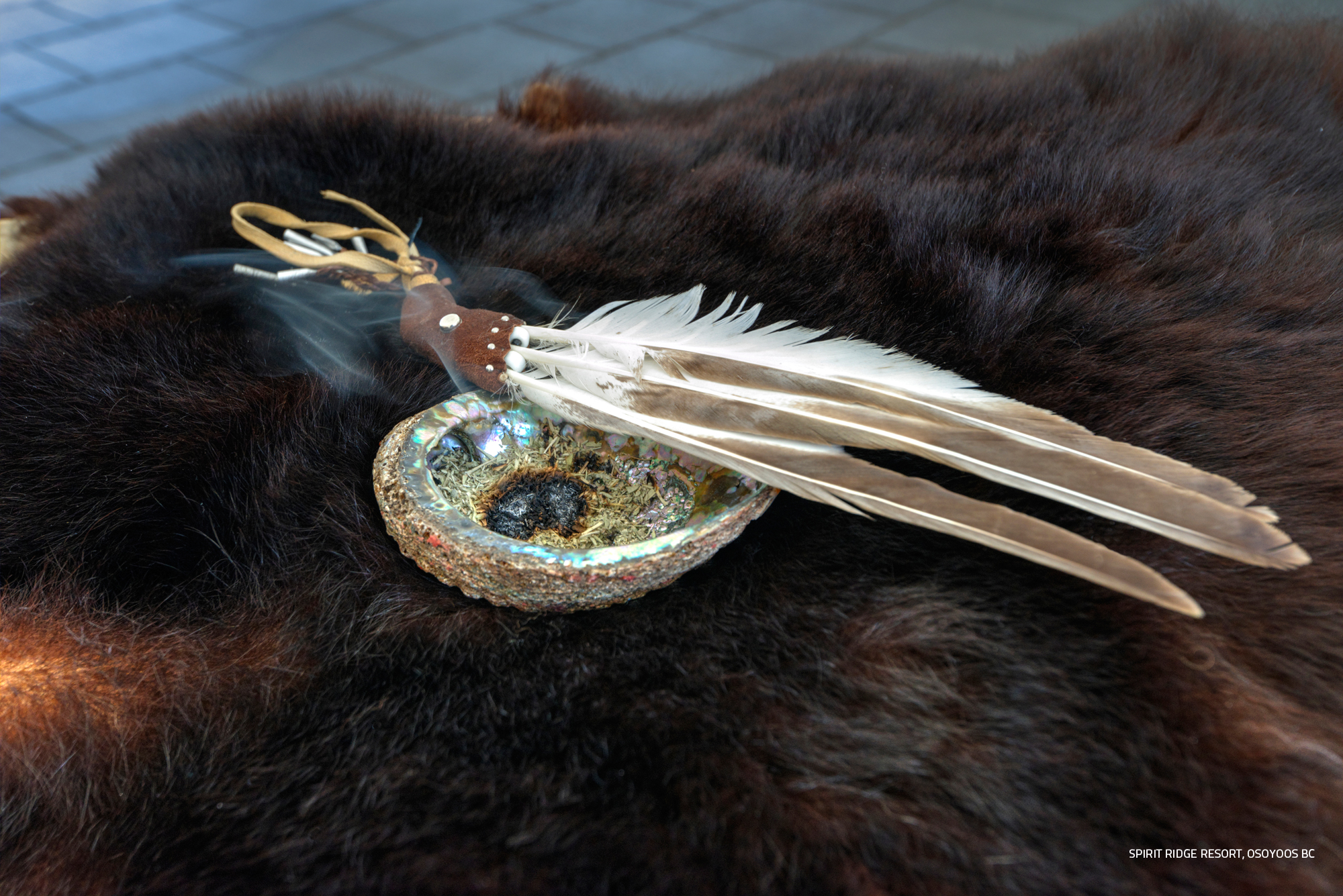 Spirit Ridge Lake Resort, Winery and Sacred Land is the first Canadian property to join the Unbound Collection by Hyatt- a global portfolio of distinct hotels that inspire the freedom to create one of kind story worthy experiences.

“We have taken over the restaurant and are rebranding it to honour our Indigenous history.  We’ve also brought in an Executive Chef who has embraced our new, exciting culinary adventure,”

In the world before this world, before there were people, and before things were like they are now, everyone was alive and walking around like we do. All Creation was talking about the coming changes to their world. They had been told that soon a new kind of people would be living on this earth. Even they, the Animals and Plant people, would be changed. Now they had to decide how the People-To-Be would live and what they would eat. The four Chiefs were: Skimxist (Bear), Ntytikxw (Salmon), Speetlum (Bitterroot) and Seeya (Saskatoon). They held many meetings and talked for a long time about what the People-To-Be would need to live. All of the Chiefs thought and thought. “What can we give to the People-To-Be to eat that is already here on earth?” they asked one another. “There seems to be no answer.” Finally, the three other chiefs said to Skimxist, “You are the wisest and the oldest among us. You tell us what are you are going to do.” Skimxist said, “since you have all placed your trust in me, he said, “I will give myself and all the animals that I am Chief over, to be food for the People-To-Be.” Then he said to Ntytikxw, “what will you do?” Ntytikxw answered, “You are indeed the wisest among us. I will also give myself and all the things that live in the water as food for the People-To-Be.” Speetlum, who was Chief of all the roots under the ground said, “I will do the same.” Seeya was last. He said, “I will do the same. All the good things that grow above ground will be the food for the People-To-Be.” Chief Skimxist was happy because there would be enough food for the People-To-Be. He said, “Now I will lay myself down to make these things happen.” Because he was the greatest Chief and had given his life, all the People-That-Were (The Animal People) gathered and sang songs to bring him back to life. That was how they helped heal each other in that world. They all took turns singing but Skimxist did not come back to life. Finally, Fly came along. He said, “You laid your body down. You laid your life down.” His song was powerful. Skimxist came back to life. Then Fly told the four Chiefs, “When the People-To-Be are here and they take your body for food, they will sing this song. They will cry their thanks with this song.” Then Skimxist spoke for all the Chiefs, “From now on when the People-To-be come, everything will have its own song. The People-To-Be will use these songs to help each other as you have helped me.” That is how food was given to our people. That is how songs were given to our people. That is how giving and helping one another was and still is taught to our people. That is why we must respect even the smallest, weakest persons for what they can contribute. That is why we give thanks and honour to what is given to us.